Treasurer: The April treasurer’s report showed $1,340.57 in the checking account and $80.50 in petty cash. Since the club has decided to have coffee and cookies at the meetings, Howard Jarvis donated $100 to cover the cost. This was put into petty cash making it a total of $180.50. Joe Osuna moved to accept the treasurer’s report, Howard Jarvis seconded. Unanimously approved.


Birthdays:  there were none.


New Business:
Thanks to Bob Slater for hanging all the pictures and awards in our new locale.


The July Inside Leisure World, featuring 105-year-old Kate Pedigo,was filmed in our new studio. The VPC will be doing more ILW shows here rather than going to SBTV-3’s studio in downtown Seal Beach.


Joseph encouraged VPC members to plan more ILW shows that can be done both in this new studio and out-and-about Leisure World. In the past, shows were only filmed in the SBTV-3 studio.


On the VPC website is a folder with the opening and closing for ILW to be added to new shows.


A story about the VPC was in the current Leisure World newspaper as a call for new members. VPC volunteers were requested to put further stories in the paper to let Leisure World residents know that the VPC welcomes new members and asking those interested to drop by during KIO hours. Joe Osuna volunteered to do the next newspaper article and took a picture of all the VPC members present at the monthly meeting to be included in the article he would submit that day.


Round Table Discussion:
Paul Bassett talked about his need for a crew for his project the Fourth of July event. He has Michael and Joe scheduled to be on camera.
Michael Oh filmed the Suede Soul Dancers on June 18 with Gui at second camera.
Joe Osuna reported that Robin could not be at the meeting because of the many changes being made at SBTV-3. Further, he explained the folder on the desk top of “August Shows for SBTV-3.”
Bill Holden reported that he found the door unlocked. The new doors need to be checked to see that they are truly locked when members leave. Bill interviewed Kate Pedigo and Bonnie Cooper filmed a show.
Bonnie Cooper thanked Kate for allowing the interview. Bonnie is planning a party for Kate’s 106 birthday in club house 3. She also completed a film about a guide dog for a blind resident that had to be retired. That person is getting a new guide dog.

Posted by Joseph Valentinetti at 11:16 AM No comments:

Posted by Joseph Valentinetti at 10:52 AM No comments:

The Golf Cages are Moving 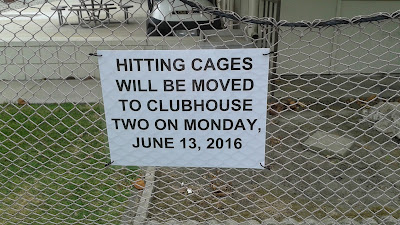 Open times are
All meetings by ZOOM
Contact us at
0501042@gmail.com

Where to See Our Shows