May Open House at the Video Producers Club 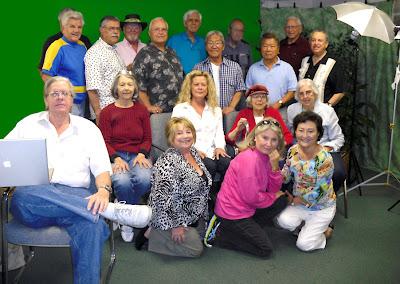 The Video Producers Club invites you to visit their studio from 10 am to noon, Monday through Friday, during the month of May. A member of the club will be available to discuss the club activities and answer questions on video editing. The club studio is located at the North-West corner on the ground level floor of Clubhouse 5.  This is the club project “Keep it Open” for the community.
The following members have volunteered to be available. Mondays is Joe Osuna. Tuesdays is Ray Jarris. Wednesdays is Joseph Valentinetti. Thursdays is Paul Bassett or Bob Slater. Fridays is Mary Apte.
The Video Producers Club is preparing to have the ability to transfer VHS tapes onto DVD’s. Donations are accepted for this work. VHS are vulnerable to deteriorating over time, causing the loss of precious video memories. We can create DVD’s of those VHS tapes. It takes a lot of time for transferring and burning a DVD.
Posted by Joseph Valentinetti at 6:48 AM No comments:

Inside Leisure World taping for May 2013 SBTV 3 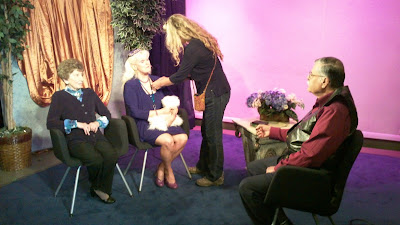 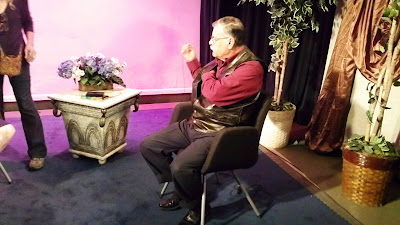 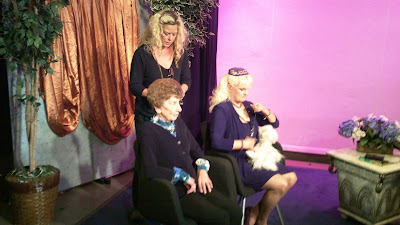 Producer Robin Forte-Lincke with the guests.

The show airs in may. Be sure to watch.
Posted by Joseph Valentinetti at 8:45 AM 2 comments:

New shows are coming to local channels in April

New Leisure World programs
will be shown in April on local
Time Warner Cable Channel
SBTV-3 and Verizon Cable
Channel 37.
The programs are submitted
by members of the Video Producers Club, who are certified videoproducers.
Copies of the programs are
available for $15 per DVD from
Station Manager Robin Fort-Lincke, who can be reached at
SBTV03@gmail.com
or (562)696-1404.
Club Internet information isavailable at
LWVPC.Blogspot.com.
The following shows are
scheduled:
•
Abilene
One hour of western rock
music and dancing provided by
Terry Otte & Abilene for the
Theater Club’s Country Western
Dinner Dance in March. Band
members are Rod Anderson,
Michel McCarthy, Terry Otte,
Harry Reichman and singer Tina
Schaffer. Joe Osuna is the video
producer.
•
Barbershop Singing Club
The Little Flower Guild of
Holy Family Church hosted a half
hour of barbershop-style singing. Singers are Robert Bohlig,Chuck Burnett, Keith Clausen,
Bill Frambach, Marty Fuchs, Lou
Joseph, Ken Kline, Bill Kuss,
Tom Lewis, David Locy, Lillion
Loring, Norm McArthur, Marjorie McCauley, Nola Meredith,Joe Nagle, Sid Nicoll, Carol
Robinson, Phil Roth, Letty Rush,
Paul Sandorf, Jackie Thomas,
INTERNATIONAL FOLK DANCING
—Nancy Mayhew was
wearing a Ukranian costume at a folk dance party in Clubhouse
3 last week. The folk dancing club meets every Friday morning
in the lobby of Clubhouse 3 at 10:30. Instruction for beginners
is given, and everyone gets exercise and fellowship.
Ron Vogler, Carol Wohlt, and
Shaun Wohlt. Music director is
Marty Fuchs. Camera operator
is Ray Jarris; video editor is Joe
Osuna, and video producer is Bill
Frambach.
•
Country Western Dinner
Show
One hour of LW entertainment is presented by the Theater
Club. Bob Slater, president of the
club, introduces Alexis Sweeney,
emcee. The Pure Joy dancers,
directed by Lynn R. Heath, strut
to “Running Water.” Dancers are
Joseph Chavez, Shirlene Chavez,
Jeanine Greb, Lynn R. Heath,
Margaret Humese, David Noble
and Vickie Van Ert. The following singers performed, in order of appearance: Bob Smallwood and
Betty Ballen,
Barbara Chambers,
Frank Destra and Vickie Van Ert,
Ellen Brannigan and Diane Burnett, Geri Stone,
Cowboys BillFrambach and Chuck Burnett,
Audrey McKenzie, Joseph and
Shirlene Chavez, Carmen Edwards, and Gaye Levy-Slater andBob Slater. The Tip Top Dancers,
aka Theater Club dancers, also
performed “Buttons and Bows”
assisted by Terry Humphrey singing with David Noble. Joe andOralia Osuna are the camera operators. Joe is the video producer.
•Songs of America
The show features a half
hour of “Songs of America” by
Harpin Harry. Harpin is played
by Rob Roy. Harpin is an expert
harmonica player who entertains
with the songs of yesteryear when
the West was young. Joe Osuna
is the camera operator and video
producer.
•Indio Date Festival
Join Joe and Oralia Osuna
as they travel to the Indio Date
Festival in California in this half
hour program. The tour features
carnival rides, ostrich races and
much more. They are the camera operators, Joe is the video
producer.
•
Dancing and Music
Joe and Oralia Osuna share
a half hour of musical entertainment from the Indio Date Festival. Joe introduces the Arabian
Nights Pageant, and Oralia, the
Ballet Folklorico Sol del Desierto. They both did the camerawork. Joe is the video producer.
•
Here Comes Judge Shirley
Shirley Ranaldi plays Judge
Shirley in this half hour T.V. Judge
Judy spoof. Howard Bleakley is
the plaintiff; and Tillie Stiehr,
the defendant. Phil Vlaic plays a
surgeon and a reporter. Joe Osuna
is a witness and a reporter. Oralia
and Joe are the camera operators.
Joe is the video producer.
•Hanging Judge Carol
Enjoy a half hour of court
drama, as Carol Robinson, aka
“The Hanging Judge,” rules on
the plaintiffs and defendants and
chastises her court personnel for
not paying attention. Actors are
Lou Joseph, Julie Nicholson, Joe
Osuna, Carol Robinson and Phil
Vlaic. Oralia and Joe Osuna are
the video camera operators. Joe
is the video producer.
•
Inside Leisure World
In episode No. 159, Mary Apte
interviews Vanessa Morris, the Leisure World librarian, and one of her assistants. Learnabout library services, changes and the Friends of the Library program.
Inside Leisure World is sponsored by the Video Producers Club.
•
Around Seal Beach
The first part of the half-hour program features a tiki forest inSeal Beach. Visit with Chuck Stone as he shows you his palm treesculptures. Chuck explains how he started his career in the business.
The program ends with a trip downtown for a Saint Patrick’s event.Ouit-of-town visitors and locals are interviewed. Joe and Oralia Osuna are the camera operators. Joe is the video producer.
—Joe Osuna

Posted by Joseph Valentinetti at 1:20 PM No comments:

NEWS
The Home League of The
Salvation Army will meet at 7
p.m., Monday, April 8, in St.
Andrews Clubhouse 4. Greeters
will be Jill Ayers and Jeanette
Bensema. Maj. Irene Seiler will
give the welcome, lead in the
Pledge of Allegiance and make
announcements. Cherrie and Bill
Green will give the devotional
and lead hymn-singing. Maj. Fred
Seiler will accompany on piano.
Kip Watkins will introduce
guest speaker Joe Osuna, a well-
known member of the Video Pro
-
ducers Club in Leisure World. He
will explain the video production
process. The Video Producers
Club provides two stations to
Leisure World: SBTV Channel
3 and Superwire, closed circuit to Leisure World.
Refreshments will be supplied by Jeanne Morris and Ruth Payne
and served by tea hostesses Ann Hause and Leone Metros.
The meeting will conclude with door prizes wrapped by Jackie
Verville and presented by her husband, Bruno.
Maj. Fred Seiler will close with words of appreciation and prayer.
Thanks to those who helped distribute gifts to Country Villa
last Thursday in a program that is sponsored by the Leisure World
Interfaith Council.
—Irene Seiler

Posted by Joseph Valentinetti at 1:09 PM No comments:


LEISURE WORLD VIDEO PRODUCERS CLUB
MINUTES – Ebay Room Clubhouse 5
March 28, 2013
Meeting was called to order at 9:00 AM by President Joseph Valentinetti.
IN ATTENDANCE: Howard Jarvis, Bob Slater, Dick Davies, Kate Pedigo, Bill Frambach, Chuck Burnett, Joseph Chavez, Joseph Valentinetti, Bonnie, Eilene, Paul Basset, Gui Baker (12)
The February minutes was read by Mary Apte
TREASURER’S REPORT: Joe Osuna wasn’t available but the treasurer report was posted at the Internet.
INSIDE LEISURE WORLD – the host is Mary Apt and her guest is Vanessa Morris the librarian and Judi Gain. In April Joe Osuna will host and his guest is Galit Slader.
Volunteers for Inside Leisure World are BonnieCooper, Bob Slater, Eilene Cistano, Dick Davies, Ray Jarris and Joseph Valentinetti.
Joseph Valentinetti announced that anybody can interview the club they belong to for publicity.
Kate mentioned that we can also tell the life story of somebody we know. Such as her next door neighbor who is a Mormon, a street sweeper, and she got invited to the new Mormon church in downtown. She found that the church was amazing.
At the meantime, she has also been interviewing Kip in regards to his life.
President Joseph said the Video Producer club would need a computer for transfer disk.
The Recreation Department met with our club members because they want to use our room for their storage. And wants to move us up in the Amphitheater room upstairs. Our club members had informed them what we are doing for the Leisure World share holders hoping we won’t get kick out of our office.  They said the Shirley Reimer is behind us, Terry de Leon is backing us up.
Bill Frambach had brought up that the taping of Barbershop Quartet created disturbance in the sound system and asked for feed back. President Joseph had mentioned that he will forward him the “assisting system devise” to eliminate sound around the microphone.
Dick Davies said the Bill Coleman is only working part time and Clubhouse 4 & 2 are set up for the system.
Eilene said she is working on two projects. One is the Tai Chi class and also Scrape Book club. Bonnie will give up taping Sunshine Club and Ana Derby’s boy friend Michael will take over. It has been brought up that he has to be Certified before the taping can be submitted to SBTV3.
Do had done Hula taping, but he was informed that he didn’t take the class to get pass for certification in order to be a certified producer. But he can find someone to sponsor her and He will try to attend the next class when being offered so he can be Certified.
Meeting adjourned 10:05 am.

Posted by Joseph Valentinetti at 7:03 AM No comments:

Open times are
All meetings by ZOOM
Contact us at
0501042@gmail.com

Where to See Our Shows